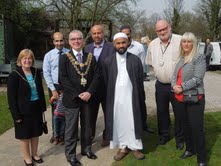 I had a fantastic time at the official opening event of a new community asset in Hall Green. The Birmingham Shadhiliya Trust, a Sunni Sufi Muslim charity, took over the old hut that used to belong to the Sea Cadets.

This hut, and the land it sat on had been neglected for many years and both have now been transformed into a space that will offer the perfect home for many different activities.

Sunni Sufis follow a Sufi spiritual guide, Sheikh Nuh Keller, an American who converted to Islam in the 70s and was authorised as a master of the Hashamiya al-Darqawiya al-Shadhiliya Sufi order in the late 90s. Sufism is the form of Islam that focuses upon spirituality, mysticism, improving one’s inner state and serving others. This focus has been translated throughout the development and the building has been named Zawiyat al-Ma’ab al-Shadhiliya (A wondrous and beautiful place of return). 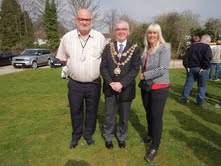 Lord Mayor, Mike Leddy undertook the official ceremony which was attended by members of the Trust, user groups, neighbours and councillors. We were treated to a falconry display, invited to have a go at archery, offered fabulous food and indulged with henna art.

With an unofficial motto of service before self’  – the  Sufi focus on spirituality, mysticism, improving one’s inner state and serving others was ever present and it was a day to remember and I am sure that a warmer welcome would be hard to find.

A number of activities have already been arranged with a scout group starting very soon, yoga classes and archery. I look forward to many further visits and getting involved in some of the activities that will be taking place over the coming months and urge others to take a look and see what is on offer.

When I helped to paint my community centre, giving up a day’s holiday, I did so because I believed it for a good cause. I believe in contributing for the benefit of my community but is this ‘Big Society’?

Cameron’s Big Society was launched back in July 2010 and had two essential components – volunteerism and localism. His vision was for a dramatic redistribution of power ‘from the elite in Whitehall to the man and woman in the street.’

The Big Society rhetoric provided Tory politicians the opportunity to present a small government ideology with the promise of continuing services through the community sector. It promised to put communities in control but the reality is that they have not benefited in real terms, nor has the wider community.

Cameron’s Big Society is nothing more than a subterfuge for cuts and the continuation of a Thatcherite attack on the state. The notion that the private sector was ever going to step in and replace the hundreds of thousands of jobs culled in the public sector, when in the depths of a recession the banks were not lending, was a pipe dream.

Cameron continually disputed this charge, arguing that the concept of Big Society was ‘not about trying to save money, but about trying to have a bigger, better society.’, a claim contradicted by the Communities Secretary with Pickles publicly boasting that ‘big society was about getting more for less’.

A poll published in The Independent in 2011 found only 21 per cent of people disagreed with the view that ‘The government’s ‘big society’ was merely a cover for spending cuts.’ By the time the Big Society concept had celebrated its first birthday, and although it had been through four relaunches, 78 per cent of voters did not know what the ‘Big Society’ was meant to be. Those that did have some understanding saw it ‘as a recipe for abandonment’.

It is hard not to see Cameron’s Big Society as the big con it really is.

It was launched without any insight into how the voluntary sector worked and the costs involved. Plenty of community spirited people might be willing to work for nothing for the benefit of society but they certainly won’t want to or could not afford to incur costs to do so.

As government inspired council cuts continue to take their toll on us all, the voluntary sector has also been heavily hit. This is a bit that Cameron appeared to forget to think through. The delivery mechanisms for his ‘Big Society’ need funding and when local authorities are having their funding grants cut by huge amounts, then the voluntary sector projects cannot sustain themselves. Many have already disappeared.

The Big Society was supposed to make us all want to volunteer our time for the betterment of society. In reality, the funding cuts imposed by the Tory led government have deprived hundreds of thousands of volunteering opportunities. But it doesn’t stop there.

Behind all the talk of localising power, enabling and volunteering, the Tory vision of the ‘Big Society’ is very clear. Cameron’s pet project is built on the underlying intention of sacking hundreds of thousands of professionally trained public sector workers and to instead provide vital services on the cheap with volunteers. There is a clear difference between services provided by qualified and trained workers and those provided by community minded volunteers. Those of us who can give up some time to help with community projects do so knowing that we are doing ‘our bit’. There is a clear difference and this is the real crux of the issue. This is the reality of Cameron’s Big Society.

A big society, a fairer society… whatever it is called is about one clear notion.  It is not about replacing workers with volunteers, it is about volunteering to work. We must all be mindful of this difference and not fall into the trap laid down by those proponents of Cameron’s ideology. 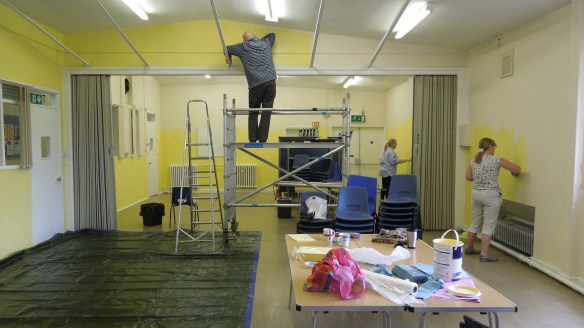